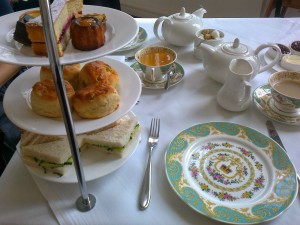 “Georgiana, you know you can’t rush a good tea.”

She sat, her back rigid and removed from the moss green velvet upholstery. Her silk dress with its dizzying geometric pattern clashed with the regal elegance of the Regency settee. She should have known better than to have worn it, let alone bought it. Perhaps it was an unfortunate gift from that banker husband of hers. He had wretched taste.

Of course it was. It was always about him. Her wretched taste has been unquestionable since she began seeing the brute.

She twisted her hand in her lap and looked at me. A tear began to puddle in her lower lashes.

“Don’t make a fuss. The tea will be here soon. Look at the light.” I pointed to the glass ceiling.

Imagine crying at The Orangery.

She looked up and I saw her swallow. Her chest heaved up and down. My equilibrium flew off kilter from watching the pattern on her blouse swell and recede. I wish she’d put on, and for God’s sake, button her jumper.

“Shall we walk to the gallery, or call for a cab?”

“Georgiana, don’t change the subject. Just control your emotions. Be irate, but do not be a simpering ninny.”

“Right.” She looked around and then lowered her voice. “There is a great deal of money missing from one of our accounts.”

“Maybe he bought you a gift.”

“Highly unlikely, unless he bought me a Rolls Royce or a small boat.”

“Have you spoken with him about it? Maybe he’s made an investment. You know how bankers play with money.” And other women.

The server appeared, rolling the tea trolley laden with finger sandwiches and lacy cakes. She reached for the plate he stretched to set before her as if she hadn’t eaten in weeks. I should have known better than to suggest we meet at Kensington Gardens.