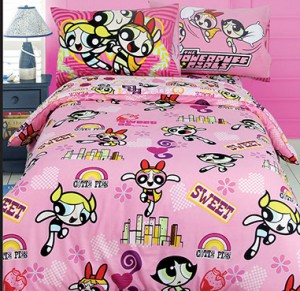 “I love you, Cam. Even when you don your cloak of darkness.”

She didn’t budge, but kept her head buried under her arm as she sat on her deep carpet, leaning against her single bed.

I wondered why she still had such a juvenile bedspread, when she was trying to be so deep and goth. The cartoon characters had to go.

I scooched back against the wall, used a stuffed bear or something to prop myself up, and lit a cigarette.

It was weird, sitting in her room, smoking, wondering what would happen if her parents caught us up there, alone. Not that we were likely to do anything, what with Cam on the rag and all. That had to be it. She was always extra moody, I mean beyond the thick black eyeliner moody, when it was her time.

“Fuck you, she said into the pink bedspread.

I could take that.

“What’s with the powderpuff girls? Should we get a Sharpie and turn them goth? Give them black capes?”

“What? Like my ‘cloak of darkness?’ You’re such a dweeb.” She pulled the cigarette from my fingers and took a drag. “Get your boots off the girls!” She swatted my feet.

“You shouldn’t let Mr. Butterfinger give you such a hard time about your writing. I mean what does he know? He’s a fucking high school English teacher. How many best sellers does he have?”

“It’s just that I worked so hard on that piece. I liked it.”

“Are you kidding me? Consider that a starting point, an early draft. Was there anything he said that was helpful?”

“Yeah, ‘this is a cliché.’ Of course it’s a cliché, it’s about fucking vampires. Vampires are cliché.”

“So make your vampires different.” I pulled the Sharpie out of the cup on her desk and drew fangs on the powderpuff girl.

“Give me one.” She nodded her head toward the can. I gave her the pen I was holding and took another for myself.