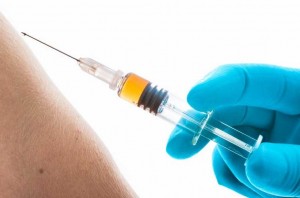 Emily stood behind Isaac in the long line snaking its way through the gymnasium. She slowly stroked her crossed arms, savoring the feeling of her soft cardigan.

She turned to look at Zoe, her best friend since kindergarten. Her face was tight, her green eyes wide. Emily reached out and ran her closed hand down Zoe’s long copper braid.

Zoe’s forehead crumpled in, her eyebrows lifted and a pool of tears formed in her lower lashes.

“I’m sorry, but you want me to tell you the truth, right?”

“This way, we’ll be prepared. Mother says to take a deep breath and then to let it out slowly as they give the injection.”

They moved forward in the line and watched as Mary Jane walked away from the table where the nurse was administering the vaccines. Aldo was up next. His face was like a rock.

They watched him lift his sleeve, and then looked away.

“Maybe we should talk about ballet class.” Emily suggested.

They fell into an uneasy discussion and half-hearted demonstrations of the positions and routine for their upcoming recital.

Then, Emily was up.

“Move your sweater,” the nurse said. No, ‘Good morning. This isn’t going to hurt a bit.’

Emily pulled the cardigan off of her right shoulder, exposing her tiny, muscular arm. The nurse pulled the plastic wrap off of a new syringe with her stained teeth and then watched, with her beady black eyes, as a drop of liquid oozed from the spike. The nurse grabbed Emily’s arm with her blue latex glove and pulled her closer, causing her to loose her balance.

Emily did as she was told and felt the pinch.

She hadn’t had time to take a breath. She sucked in air.

“Don’t cry. The other kids didn’t,” the nurse said as the heavy medicine pumped into her muscle.

She turned her head and looked down. She hadn’t meant to do that. She felt sick. She watched as the long needle came out of her skin, leaving a bulge behind.

“Take him into the office,” the nurse yelled across Emily to another nurse standing near the gym door. Isaac was lying in a fetal position, on the half-court line, gripping his stomach and shaking. His eyes bulged and saliva dripped from his mouth.