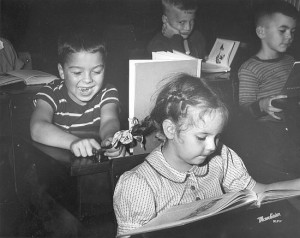 “Tommy Horn, you better shape up or ship out.”

A hush descended upon the classroom. Someone coughed.

Tommy sat back down in his desk chair and gaped at the textbook in front of him. Algebraic formulations swam on the page.

Did she really say, “Ship out?” He looked up at his normally lovely eighth grade Math Teacher, Mrs. McKittrick. She had turned her back on the class and was erasing the formula from the chalkboard in huge swaths of white. The arches reminded him of mounds of snow. He wondered how his father was surviving the winter in Europe. Her arm worked feverishly, as if she was trying to erase what she had said. About a third of the class had fathers who were over there. They’d shipped out, but it wasn’t because they’d done something bad, like tugging on Mary Jane Engersol’s braids and calling her Heidi.

“It’s okay, Tommy. I’m sorry she said that.” Her eyes were glassy and her face was soft with concern. He’d expected her taunting tongue and wrinkled, I-told-you-so nose.

He wondered what her hair looked like free from the braids.