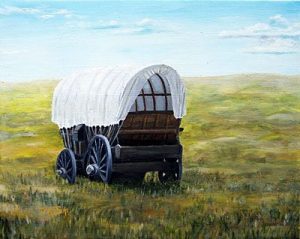 They’d been traveling west since the snow melted in Galesburg. She noticed the first green buds on limbs back in Missouri. The trees provided much needed shade in Iowa, and in Nebraska territory she began to bleed. Her mother told her what to do with the rags and how to conceal the filth from the men.

“Won’t do to remind them you’re a sinful woman. They’ll be sniffing around you like dogs.”

Patience’s breasts ached and grew round under her pinafore and her stomach cramped as she was jostled around in the wagon. Sometimes it helped to get out and walk beside the oxen. It took the pressure, which built up, and moved it through her body. Besides, her siblings with their chatter and tapping and nonsense became so annoying she thought her head would pop.

But the trip grew long under the baking sun and the load they carried to their new life in Oregon began to slow them down. A broken wagon wheel could cost them days. The fallen ox meant they had to leave the dining table in the tall grass to crack under the endless sky, but it also meant a hearty meal for them and for other families passing by. Mother set the table properly, for the last time, with the candle sticks and fragile china unpacked from the straw in the barrel. The family bowed their heads in thanks, sitting in their regular places.