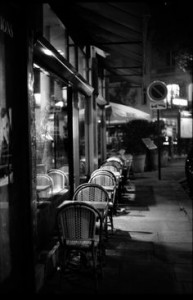 “Danielle! Danielle!” Gerard called through the fog blanketing the Seine.

She had left their apartment hours earlier, before sunset. Because of their row, he hadn’t asked where she was going. He had to look like he didn’t care. If she knew how much she meant to him, it would make him vulnerable. The thing was, he was vulnerable.

And now she had left. The very thing he was afraid of.

He came across a waiter sweeping leaves from the sidewalk into the gutter in front of Le Roi Café. Inside, a few stragglers held up the bar. The gaslights were turned up to encourage the patrons to make their way out into the night. Danielle was not inside.

“Pierre, have you seen Danielle tonight?”

“She passed by. Looked like she was headed to the Pont Neuf.”

“Merci.” Gerard clapped him on the shoulder.

At least she wasn’t headed to Montmartre. He’d hate to find her back at Madame Boucher’s. But where else would she go on a cold night like this? There she’d have a bowl of stew, some wine and a warm bed. And company. She’d have company.

Maybe he should check Madame Boucher’s. He started walking briskly toward the hill. No. He stopped and turned back toward Rive Gauche. Danielle wouldn’t go back to that kind of life. Not after knowing what real love was.

Was what they had real love? He tightened his scarf and pulled his waistcoat close, heading into the wind and across the river.

He knew she loved him. She showed him every day. The way she nibbled his ear to wake him up. She made his lunch and wrapped it in a clean cloth for him to take to the apothecary. She played nicely with his drunken mother and was respectful to all of his siblings. She even helped to cover his board when he fell ill last spring. Most of all, she told him how important he was to her, how much she loved him, how she wanted to spend the rest of her life with him.

And what had he done? “Imbecile!” He yelled out loud, scaring an old woman hurrying along the bridge.

“Pardon.” He doffed his hat.

“You are in trouble, Messieur?