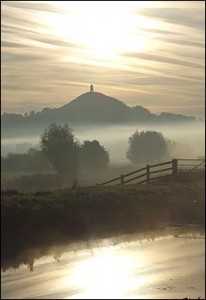 “Avalon will always be there for all men to find if they can seek the way thither, throughout all the ages past the ages. If they cannot find the way to Avalon, it is a sign, perhaps, that they are not ready.”  Marion Zimmer Bradley

I was a junior in high school when I first found this passage, what I perceived to be a personal challenge in The Mists of Avalon. Whatever one thinks of Marion Zimmer Bradley, her writing and her controversial personal life, I have to thank her for introducing me to a part of my soul. It awoke a spiritual longing I couldn’t explain then.

I loved the Arthurian legends as a child, tales jam-packed with chivalry, adventure and Merlin’s magic. I started off with with Rogers and Hammerstein’s romantic musical, “Camelot,” and Disney’s animated “The Sword in the Stone.” When I was 13, John Boorman’s dark and intriguing movie, “Excalibur” played repeatedly on “Z Channel.” I read T.H White’s The Once and Future King and Steinbeck’s parody, The Acts of King Arthur and His Noble Knights. I bought, but never read, Sir Thomas Malory’s Le Morte D’Arthur, which weighed heavily on the bottom shelf of my bookcase.

The Mists of Avalon, while not the world’s greatest book, is still a personal favorite, rich with the usual myth, mystery, court intrigue and romance. It differs from other versions of the story because of its focus on the earth-based spirituality supporting Arthur’s reign, and has been labeled “feminist” because of the powerful women behind his throne who aren’t portrayed as evil witches or as sinful personal property. Zimmer Bradley takes her readers to a transitional time when Arthur’s half-sister, Morgaine, a priestess of Avalon, attempts to preserve the ways of the Celtic people as Christianity sweeps across the Britains, forcing the Goddess and the dragon energies further into the mists.

Each time I’ve read the book, it sinks in at a deeper level. As I’ve matured and have learned more about the cost of living in a patriarchal society, I’ve begun to appreciate the messages Zimmer Bradley so artfully conveys about the Divine Feminine and how important it is to integrate a balance of masculine and feminine energies within myself so that I can bring that balance into my daily life in the world.

Avalon is said to be the mystic Isle where Excalibur was forged and infused with protective magic, and ultimately, the sanctuary where King Arthur was taken to heal from his fatal wound, the land behind the veil covering modern day Glastonbury. There will always be disagreements about the legends, about which version of the tale is true. I don’t claim to know what is true, which lake The Lady lives in, what the mythic Isle of Avalon actually is, or if I’ll be able to reach it, all I know is that there has been an insistent voice inside of me, calling me there for years. It is time to answer that invitation, to venture out on a quest for my own grail and authentic stories.