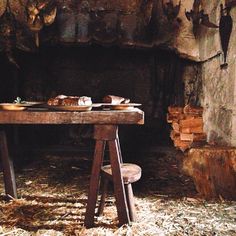 Camma pulled some fat from the carcass and dropped it into the soup. She stirred it slowly over the fire, which warmed the small hut in the dense woods.  The sunlight struggled through the leaves and into the small, open window. She hummed a soothing song as she watched the liquid swirl around and around in the iron cauldron.

A stray hair escaped her braid and fell across her eye, tickling her cheek. With the back of her hand, she swept it away and flinched as she touched her swollen face. She groaned a long, low sound from her belly to relieve the pain she felt, the anger and the loss. She rocked her body as she stirred and moaned. The cat looked up from its warm place beside the fire. She threw it a piece of chicken and he thanked her before pawing it closer with deliberate intent. He chomped down on the flesh once, twice, and it disappeared.

Gorman had used his fist. At least it wasn’t the hilt of his dagger today. Her brother had had his way with her before leaving, reminding her that she belonged to him, since their father was dead, and he could do as he liked with her.

She pulled five leaves from the wolfsbane, tore them into thin strips and stirred them into the thickening soup.

When the soup was done, she went to the river to wash the blood from her hair.

She waited to return until after dark. When she entered her dwelling, she found Gorman slumped over the table in a stiff and awkward position. She removed the spoon from his grip and her eyes fell upon the cat lying with its eyes frozen open beneath the bench.