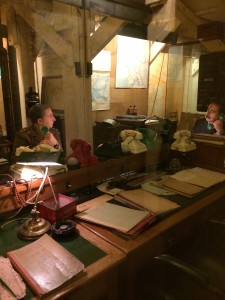 Air raid sirens punctured the night air, bringing Adelaide’s brief respite in Saint James Park to a sudden end. So long, to the flowerbeds and to the blossoms on the newly minted trees.

Please God, she thought, please let them be here in the morning.

She ran toward the Palace of Whitehall. The stone, which gave the titanic building its name, shone in the full moonlight. It was another bomber moon.

In the distance, the whistle and crash of bombs punctuated the sky. A flare of orange light haloed the horizon. Incendiaries. Lewisham. She had maybe two minutes to get inside to avoid the wrath of the bombers who made it past the anti-aircraft artillery.

The sound of other people running nearby put her on high alert. She couldn’t have them see where she was headed.

The heel of her shoe caught in a grate and she spilled to the pavement, her chin hitting with a sickening thwack. She felt a pair of hands pick her up from behind and urge her forward, toward the steps. Her head reeled and she saw lights unrelated to those in the sky.

“Come on, Love. In you go,” she heard the voice telling her as his hands pushed her into a stairwell.

“No! Let me go.” She slammed her heel onto the top of his foot and writhed from his grasp, stumbling back into the street.

“Crazy bitch,” he yelled. ‘Suit yourself.”

The bombs fell with more frequency and the windows in the buildings around her began to shake. Sirens blared as she ran, heart beating, toward the safety. She fell into the dark entryway and knocked once, three times in rapid succession and twice slowly.

“Open.” She leaned her head against the door and tried to breathe as the planes came closer. She could hear that they were just on the other side of the Thames. Lambeth, maybe. She repeated the pattern again.

“Stupid girl.” All she’d wanted was a few moments of fresh air. It was so stifling down there. She needed to see spring. The sign below telling her the day was “sunny” had sent her to her doom.

She looked around and then whispered it into the intercom.

There was silence long enough, it seemed, to bake a cake.

The door finally opened and she flew in just as the buildings began to rumble. She heard the sound of glass breaking on the road as the door closed behind her.

They rushed two flights down the stairwell, through an opening, and into a passageway, where the soldier closed a door, thick as a bank vault’s, behind them.

She leaned against the wall, gasping for air, her lungs singeing her chest with every breath, her heart throbbing.

Above them, she imagined the buildings collapsing like matchstick houses.

“We need to get down there. Take this.” The soldier handed her a handkerchief.

She looked at him, but couldn’t grasp what he was saying. He had big brown eyes.

She looked down and her blouse was drenched in the blood that now dripped onto her high-heeled Mary Janes. She hated that she’d hurt the faceless stranger who tried to save her life. She should have worn the sensible shoes.

She winced as she placed the cloth to her chin.

“We’ll take you down and get that sewn up.” He put a steadying arm around her and helped her move on.

At the bottom of the stairs, the soldier unlocked the next series of doors and they entered into the cabinet war rooms, where the secretaries typed feverishly, soldiers moved from room to room with sleek efficiency and all sixteen phones of various colors rang and were answered with lightning responses. A voice blared from the speaker on the wall, “London Central Red.”

The soldier lead her to an upholstered arm chair, where she collapsed, shaking. Across the hall, the big brass filled their seats, ready for the briefing.

“I’ll get you a medic.” The soldier turned and walked away.

She wondered if she’d be sewn up in time for her 11 p.m. shift at the teleprinter.

The familiar form, head buried in a report, cigar hanging from his mouth waddled toward her, glancing up when he saw her bloody foot reaching precariously into his path.

“Christ, Turnbridge, we don’t have enough to take care of without you going and getting yourself into trouble?”

“No, Sir Prime Minister Churchill. I mean, Yes, Sir. I’m sorry to inconvenience you, Sir.” She sat up straight and pulled her foot into a neat cross beneath her.

He made a sound that was half exasperation, half righteous indignation and moved into the situation room, slamming the door behind him.

She knew what he really meant was that he was glad she’d made it back alive.

← Finally
In Other News →